Monzo adds investments and peer-to-peer lending to its marketplace

The digital bank’s beta is soaring as it adds another category for users, partnering with Scalable Capital, Wealthsimple and Zopa among others.

In an update to its first release, Monzo has added a new category to its marketplace beta: investments.

AltFi can now reveal that users on the beta are able to access digital wealth investment accounts from Scalable Capital, Wealthify, Wealthsimple and WiseAlpha, peer-to-peer lending accounts with Zopa and Ratesetter, and property-backed investments with Bricklane.com and Octopus Choice. 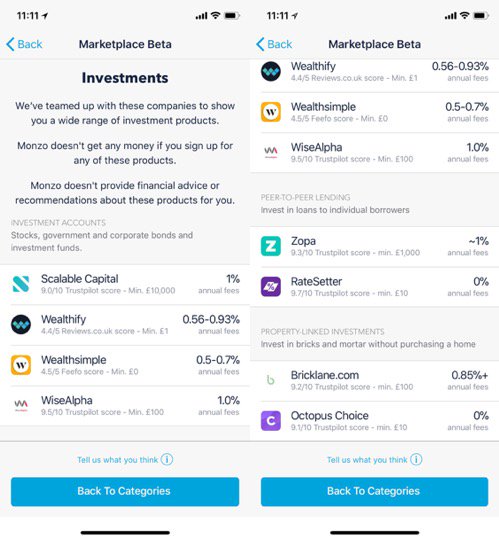 These are in addition to the savings accounts and energy switching services made available at the beginning of the month. However unlike those earlier categories, where Monzo can make a profit from a referral fee, the digital bank will not be earning any commission from its investment propositions.

Speaking in a statement on the marketplace’s initial release, Monzo’s head of partnerships Phil Hewinson said the Marketplace Beta is an “ongoing test”, to which the bank will be adding new services and partnerships all the time.

The challenger opened up an interim third-party API earlier this year, to coincide with the launch of Open Banking. Integrations so far have included microinvestments app Moneybox, and personal finance manager Emma.