Exclusive data from a 4,500-person Europe-wide survey on fintech AltFi has conducted with Streetbees reveals digital banks like Monzo and Starling are failing to reach and build trust among women in the UK and across Europe. Over half of adults in the UK (53%) are open to depositing their salary into a digital bank like Monzo or Starling, but AltFi can reveal that women are being left behind by the fintech revolution as their awareness of and trust in digital banks lags behind.

The revelations come as part of an exclusive Europe-wide survey of over 4,500 adults across five European countries, in what is one of the largest fintech studies ever conducted, to understand modern attitudes on digital banking and mobile money.

Conducted in partnership with Streetbees, the landmark survey posed 30 questions to adults across countries including the UK, France, Germany, Spain and Italy.

This morning AltFi published the first in a series of features analysing the results of the AltFi/Streetbees Digital Banking Benchmark 2019.

However, splitting these results by gender revealed awareness of every UK challenger bank was consistently lower among women. Overall a quarter of women (25%) said they’d never heard of any challenger banks, compared to 17% of men. 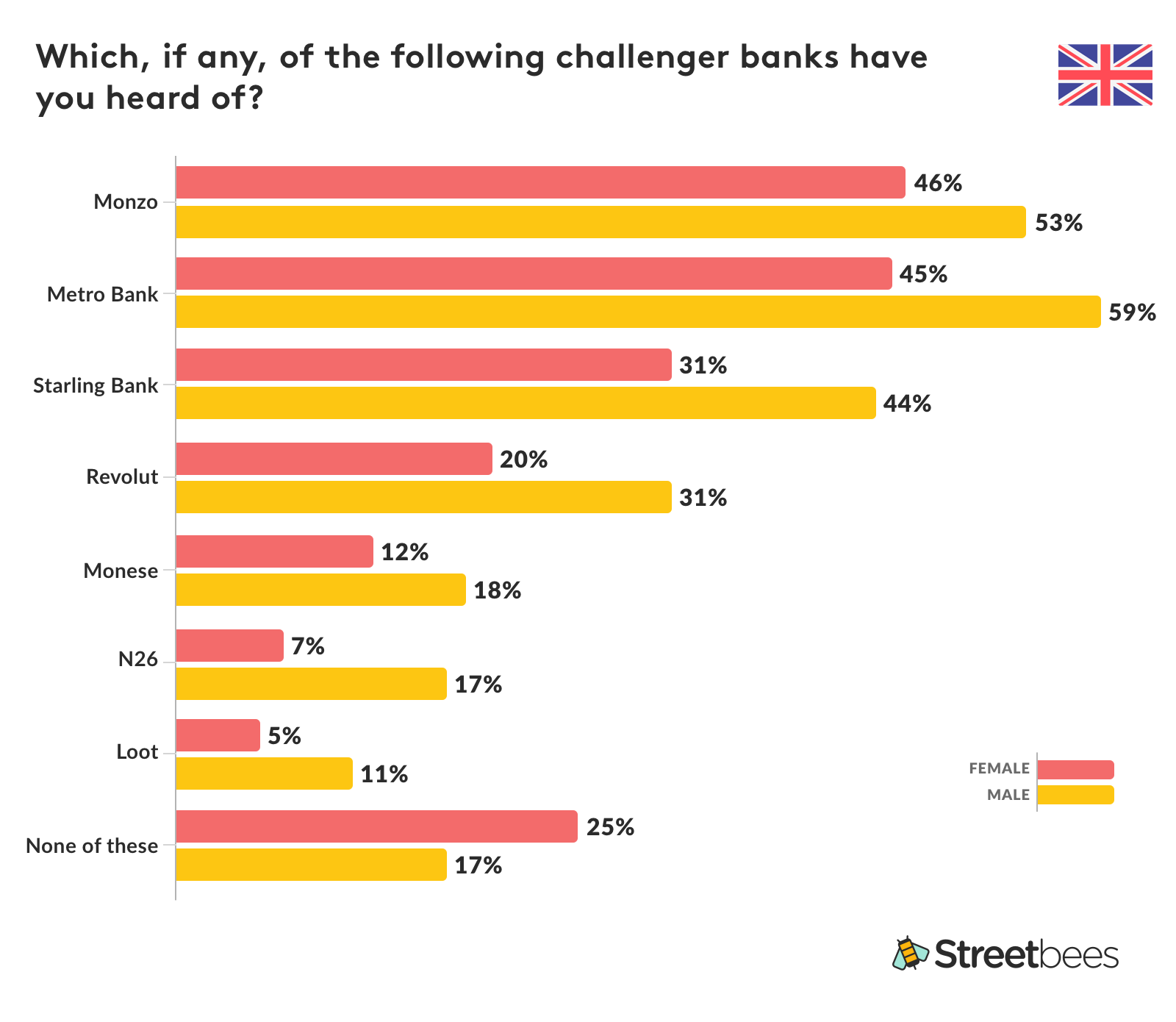 When it comes to trust, women were also found to be less willing to trust digital banks with their salaries, as 56% firmly ruled out handing over their salaries, compared to 37% of men.

"This is not just an industry problem. It goes wider than that. Research tells us that women are generally more cautious when making money decisions than men. It’s why women are better investors than men. This can mean that women are more reluctant to try new things,” Anne Boden, CEO and founder of Starling Bank, told AltFi.

"Unfortunately, with anything to do with technology and digital, the early adopters are more likely to be men.”

Starling confirmed it currently has more men in its customer base, but says it is working to reach a diverse audience, pointing to its #MakeMoneyEqual campaign to raise awareness of the gender-based stereotypes used around money in the media.

Overall 53% of UK adults in the AltFi/Streetbees Digital Banking Benchmark 2019 said they were open to switching their salary to a digital bank.

“Data tells us that historically, men have typically seen money management and investing as a hobby and as something to enjoy, more than women,” Holly MacKay, the founder and CEO of Boring Money, told AltFi.

“The early adopters of all new financial innovations have been younger men – from online trading to bitcoin buying.”

The picture in Europe

Widening the data to our entire survey across Europe, which covered 3,500 respondents across France, Germany, Italy and Spain, the gender divide in the knowledge of and trust in digital banks remained.

Of 14 digital and challenger banks which operate outside the UK, including N26 and Monese, 11 were better known among men, with N26 recognised by 44% of men, yet only 24% of women. 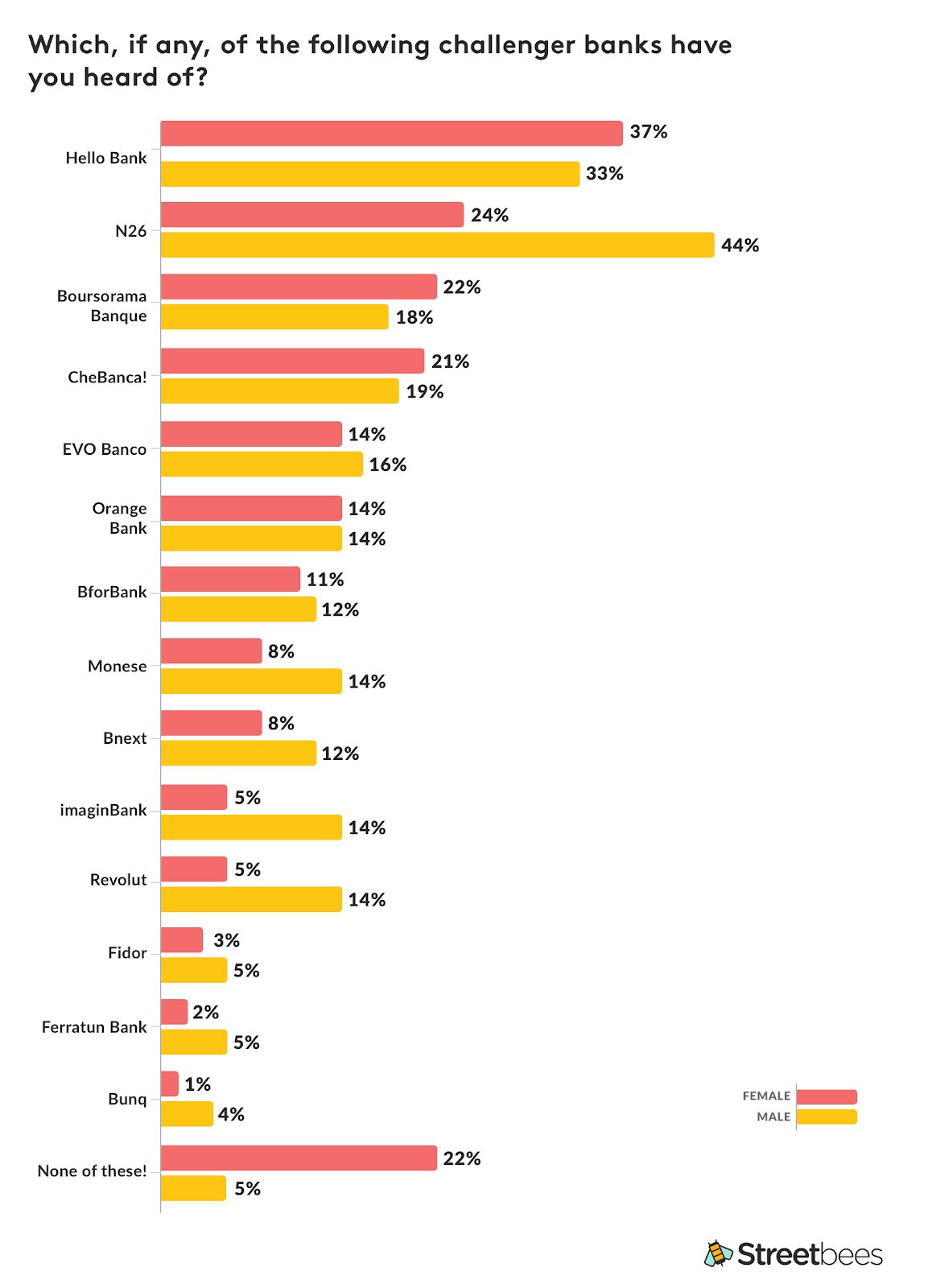 Norris Koppel, the founder and CEO of Monese, told AltFi that Monese, like Starling, found its customer base was skewed male.

“The network effects that help you grow can have the tendency to produce customers that are similar, and if men inherently are more trusting of digital products, then they recommend it to people like themselves,” Koppel explained.

“It will take time for our customer base to diversify. What we are doing right now is continue to improve the product offering, continue to test out different messaging, and look at meaningful partnerships that will help us reach more women.” 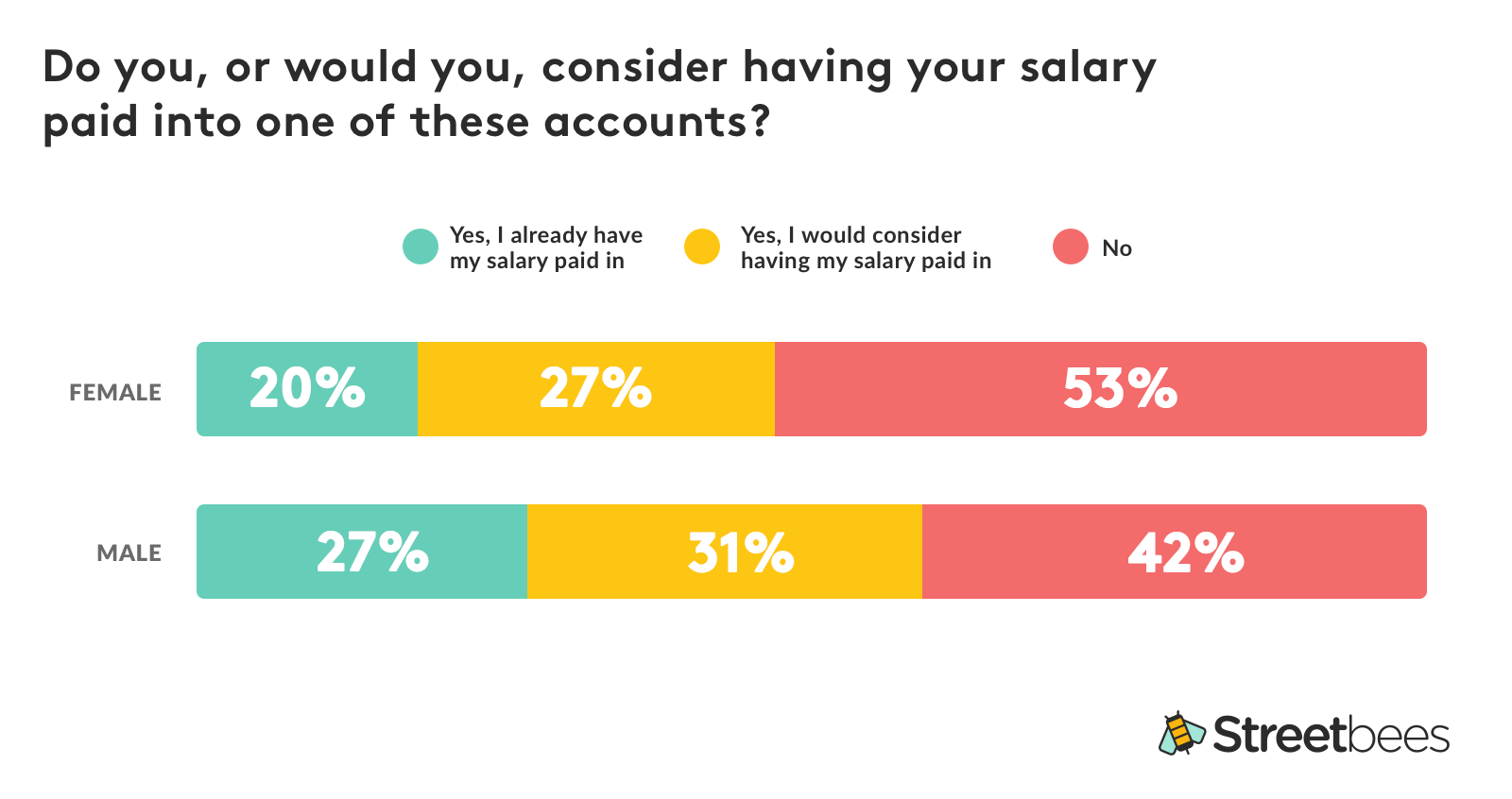 Of trust in digital banks across France, Germany, Italy and Spain, 47% of women said they were open to giving their salaries to a digital bank, versus 58% of men.

“This is not entirely the fault of fintech—there are complex and deep-seated cultural factors that hinder women's financial empowerment,” Iona Bain, founder of the Young Money Agency, told AltFi.

“But I think many brands pander to a geeky fandom who are digitally savvy and quick to embrace new financial products. And, more often than not, this excludes and alienates women.”

“Fintech is also in danger of appealing to those who are already digitally and financially literate.”

“Our research reveals how people across Europe really feel about the new wave of challenger banks. It challenges some myths—for example, that older people are terrified of fintech, while young people trust it implicitly,” said Oliver May, co-founder and chief compliance officer at Streetbees.

Want to dig into the data? The full AltFi/Streetbees Digital Banking Benchmark 2019 results can be accessed here.

The AltFi/Streetbees Digital Banking Benchmark 2019 is a landmark Europe-wide survey of over 4,500 adults in five European countries, in what is one of the largest fintech studies ever conducted, to understand modern attitudes on digital banking and mobile money.

Features a collection of 4 articles

People hate their banks. Don’t they?

All change: Apple Pay is taking over Britain, the French love cheques and in Germany cash is still king

Brought to you by: