HSBC slammed by startup for Open Banking uptime of just 20% UPDATE 2019-05-23 - Following publication the Open Banking Implementation Entity published a statement that Growth Street's analysis of their uptime data is "misleading and inaccurate" with their data showing average Q1 2019 uptime of 96.97%. “Each of the mandated banks submit their monthly availability and performance metrics to OBIE which we make every effort, as far as is possible, to verify before publishing," a spokesperson wrote.

In response Growth Street's CEO Greg Carter said: “Growth Street has used a consistent and transparent methodology to compare API performance across all banks, which is different from the methodology used by the banks themselves when reporting to the OBIE. Both Growth Street and the banks' own reports show availability performance that is low relative to other crucial internet infrastructure providers, such as cloud computing services [which typically target 99.95% availability].

Growing numbers of tech outages have ground Open Banking to a halt in the first quarter of 2019, as the average uptime of banks’ implementations reportedly fell to just 86%.

It’s the equivalent of 5,000 hours of downtime for startups trying to build apps, services and businesses that rely on connections with banking data.

The figures, reported by Growth Street this week, allege a sharp slide since the end of 2018 when the average uptime across high street banks stood at 95%.

HSBC is the worst offender according to Growth Street, with long-running intermittent outages slashing its uptime to just 20% in Q1.

An HSBC spokesperson told AltFi: “We are confident in our Open Banking infrastructure, with Open Banking Implementation Entity (OBIE) reporting showing HSBC’s average API availability as 99.3% for Q1 this year.” 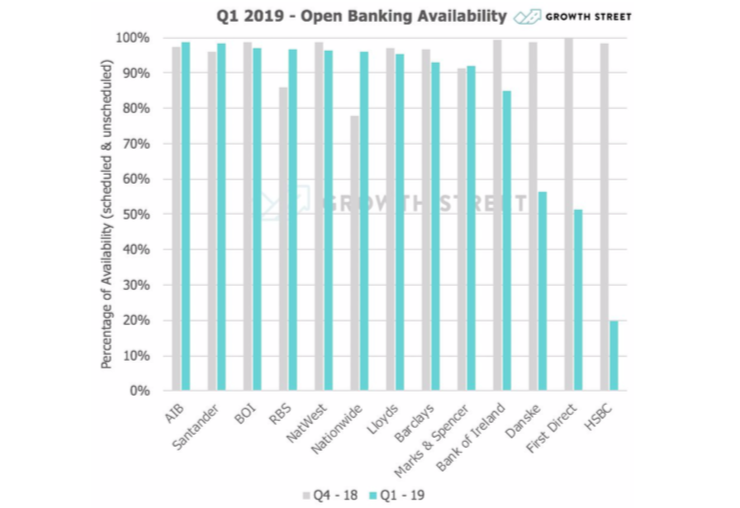 “While we are aware that the Open Banking programme has ambitious and challenging timescales, it is disappointing that some banks have needed more time to deliver some important new Open Banking functionality to their customers,” said Imran Gulamhuseinwala OBE, trustee of the Open Banking Implementation Entity.

While some banks posted slight improvements, Nationwide’s uptime rose from 78% in Q4 2018 to 95%, eight out of the 13 banks posted a decrease in their availability.

The trope that Open Banking is a damp squib is oft-repeated among fintech insiders, however in 2019 that finally looked set to change.

Klarna, Yolt, M&S Bank, AccountScore, iwoca, all have announced features or services based on Open Banking in the last few months.

Grumbles of downtime or buggy implementation are one thing, but the stark fact that the biggest 13 banks averaged 16 days of downtime last quarter proves that today Open Banking is clearly not ready for prime time.

By comparison, Amazon offers startups compensation if its web hosting uptime is anything less than 99.99%.

While some banks are achieving this, props to AIB and Santander, the overwhelming majority are nowhere close.