By Oliver Smith on Thursday 5 September 2019

A good basic credit card, especially if you're heading overseas. But lots of niggles remain... Broke 🙁 Transactions have little additional info, no spending analysis. Credit limits are fixed once account is opened. Account aggregation is missing for digital banks, and no Open Banking support. Customer service is slow. No Apple Pay.

I made some major mistakes when signing up to Tandem, and I doubt I’m the only one.

(In fact, here are 12 pages of customers getting similarly confused, so I know I’m not alone.)

The confusion starts with the way Tandem is promoting its products. Say you want to try their credit card, as I did, when you download the Tandem app and start signing up it seems like you’re going through the credit card approval process… but you’re not.

Instead, if you just download the app and register you’re actually applying for Tandem’s Fixed Savings account, which I was rejected for as I’ve only lived at my current address for two years and Tandem automatically rejects these applications. 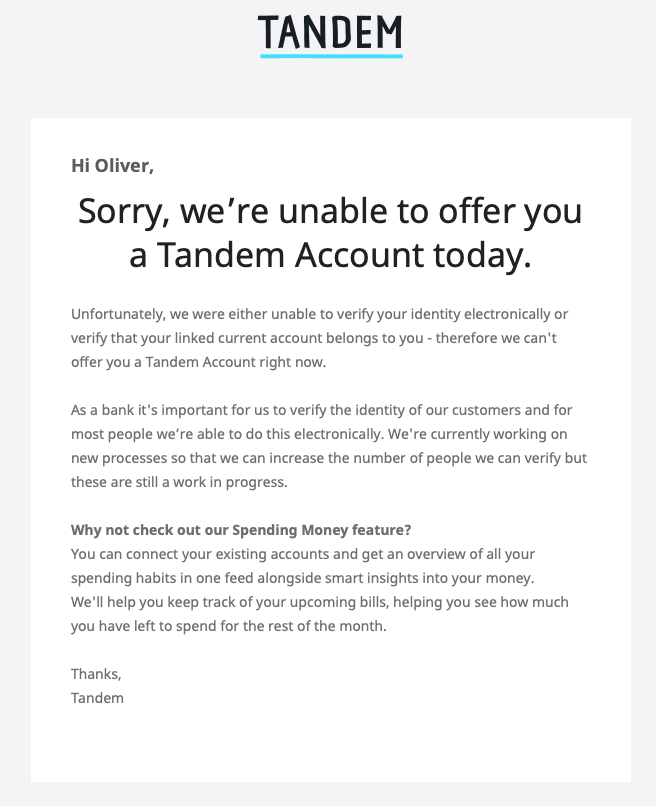 After being told I was “rejected” for what I thought was the Tandem Credit Card, I was dropped into Tandem’s account aggregation app with no clue that I was still eligible for their Credit Card.

After several chats with Tandem’s brilliant customer support (thanks Mason!) I figured everything out and was on my way.

A blue Tandem credit card arrived in the post a few days later.

Hopefully the bank’s UX team will make the onboarding process a little clearer in the future...

A spokesperson for Tandem told AltFi that "We are continually working to improve our sign-up process, we take all of the feedback very seriously and are striving to streamline the process for new customers"

With credit limits up to £12,000 (although I was only approved for £1,200, more on that later) you’re free to waltz into a store and spend to your heart's content.

And unlike American Express, Tandem’s credit card is provided by Mastercard, meaning it’s accepted in far more places than AmEx, which is good.

Not so good is Tandem’s in-app transaction list. A fairly barren experience, versus what we’ve come to expect with say Monzo or Starling.

The list view simply includes the code of the store or retailer, no time, location, proper name or logo.

It harks back to an age of bank statements where most transactions were just strings of letters and numbers for you to decipher.

You won’t be spending much time in Tandem’s app, because there’s just not much here.

For many, credit cards are all about perks.

Whether you’re an AmEx points hound, or a Tesco Bank ClubCard aficionado.

Tandem’s offering here is a flat 0.5% cashback on all purchases, money which is automatically taken off your statement at the end of the month.

Broadly speaking you earn 1 AmEx point per £1 spent, and each point has a value of around 1p.

By contrast for £1 spent with Tandem you’d receive 0.5p, or half as much as American Express.

In reality this isn’t horses for courses, as generous sign-up bonuses and promotions through American Express often see account holders netting 10,000+ points (or £100 in our example) after signing up and hitting certain spending milestones.

That said, AmEx points often sit unused for years, much to the lender’s delight, while Tandem customers benefit each month from the cashback they build up.

Tandem’s cashback is clean, simple and effective—far more so than the murky points-based schemes of many other credit cards—but financially it’s not as lucrative.

As previously mentioned, my Tandem credit was capped at £1,200, far lower than what I’d been approved by American Express for.

While I can’t comment on whether Tandem’s credit criteria are simply more stringent than other lenders, what I can comment on is Tandem’s lack of flexibility when it comes to changing credit limits.

Meaning that if you start with a lower credit limit, there’s simply no prospect of ever increasing this.

The bank will help you lower your credit limit should you wish… but once lowered you won’t be able to raise it again. 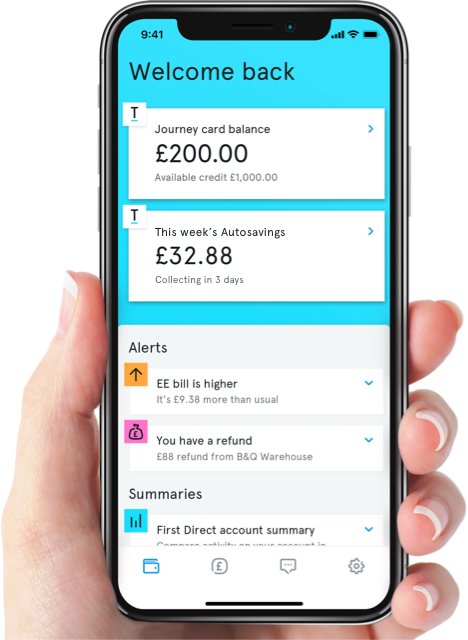 Taking your credit card abroad has always been a double-edged sword, protection on higher-risk spending, but also at times egregious FX fees.

Not so with Tandem.

Tandem is a truly great credit card to use abroad.

Tandem by default offers account aggregation similar to Yolt, which helps you to see purchases across different bank accounts and better manage your financial life.

Even if Tandem does support your bank, this account aggregation feature uses one of the oldest and least secure methods of aggregation known as screen scraping.

Essentially it requires you to hand over your banking login details to Tandem, for them to login and copy the data needed from your accounts.

Yolt has moved away from screen scraping for most banks which have implemented the far safer and more secure token-based Open Banking standards, but Tandem has none of these in place.

Regardless of what anyone says, typing your banking passwords into any app that isn’t your bank is a BAD IDEA. Even if they’re storing this data in the most secure way possible, things can and will go wrong, just ask Monzo.

A spokesperson for the bank told AltFi that "Tandem has a partnership with the Token.io turnkey platform and will be moving away from screen scraping this month in line with the Open Banking deadline."

As mentioned, I was rejected for Tandem’s fixed savings account—not that I’m terribly bothered as Tandem’s rates, especially on the shorter end of things, are hardly the best in the market. 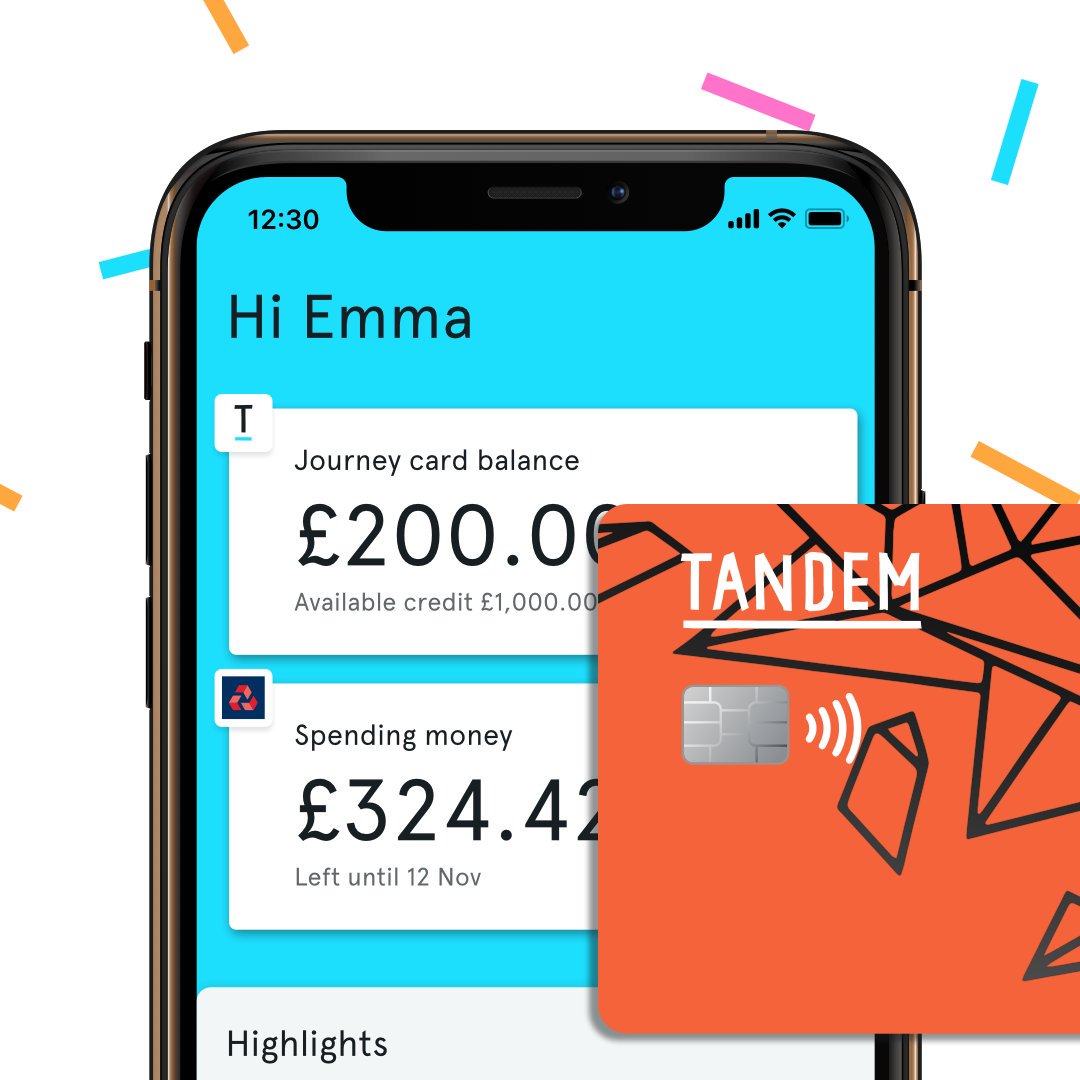 Tandem’s in-app chat support is open 7 days a week and 8am-10pm on weekdays, so better than Monese by a long shot.

However response time during a typical weekday was never better than “a few hours”, and over the weekend took far longer than that.

A Tandem spokesperson explained to AltFi that "As our customer numbers grow, we are constantly working to improve our customer service, we aim to respond within minutes but this can take longer during peak times."

"All of our customer service agents are human, not an automated system, and we aim to have personal support for each customer which can take more time for our agents."

> I was supposed to receive a £10 Amazon voucher as part of a referral bonus that Tandem was offering, but this never arrived… Correction: it finally arrived after I complained.

> The “Welcome to Tandem” pop-up in the app never disappeared, even after a month of usage, says a lot.

> Tandem’s brand identity and typography is great, on a par with Monese. Just a shame that best-in-class branding is synonymous with worst-in-class experience.

> The only other way to pay your balance is via bank transfer (no card payments), which goes into Tandem’s master account, takes 2-3 working days, and uses your 16-digit reference to make sure the money is credited to your account… careful you don’t mistype.

Tandem is a schizophrenic beast—possibly a symptom of the startup’s two acquisitions during its first six years of existence.

On the one hand, Tandem is a great basic credit card, especially if you’re travelling abroad.

Accepted in more places than AmEx, with a clearer rewards scheme, and a passable smartphone app.

On the other hand, if you’re judging Tandem against its digital banking rivals, as we are, this is a poor effort.

Signup confusion aside, Tandem’s app and lack of Apple Pay is embarrassing compared to its rivals, its credit controls are over-cautious, its account aggregation is a headache for the security-conscious, and its customer service is “meh”.

Tandem has a lot of work to do.