Women at Monzo now hold a third of all leadership roles

A jump in diversity on most fronts for the digital bank. Later today Monzo will publish its 2020 diversity and inclusion report, revealing that over a third (34.29 per cent) of its leadership roles are now held by women.

The report, first revealed exclusively on AltFi, shows that Monzo’s gender split is approaching parity, with women occupying nearly half (45.5 per cent) of all the roles at the bank.

“In the past year, we’ve continued our improvements on the ​balance of gender identity, ethnic identity and nationality representation,” the bank will announce. 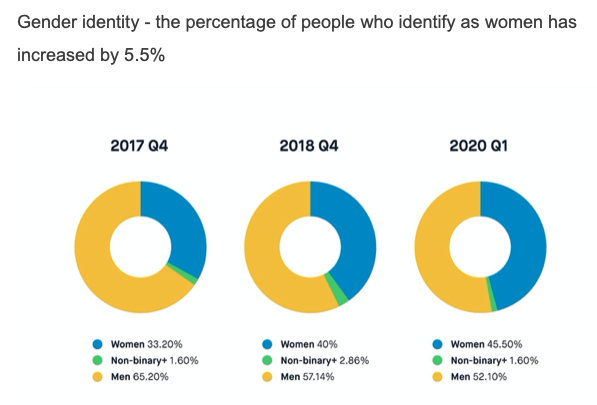 “We have seen the best improvements in our gender diversity, where we have increased our representation of women in Monzo by 5.5% through creating different partnerships with organisations focused on supporting women in industry (like Coding Black Females, NodeJS Girls and more), and through dedicated efforts in hiring to ensure a diverse pipeline of talent.”

Another jump came from the diversity of education background of the fintech’s team.

Monzo employees with university bachelor’s degrees have fallen by 3.5 per cent to 47.1 per cent, as a result of Monzo removing formal qualifications or degree requirements from most of its job descriptions.

However, the bank flagged that ethnicity representation only increased by 0.8 per cent during the year.

“We have work to do in increasing the representation of non-white ethnicities at Monzo. And we’re reviewing our processes to challenge any bias which exists. We’re running mandatory privilege awareness training for all leaders and people who join Monzo, as well as Inclusive Interview training for interviewers,” the bank will say.

In October 2019 Monzo appointed Sheree Atcheson as the bank's first head of diversity and inclusion, tasked with driving the digital bank’s diversity efforts and shaping the HR policy for Monzo's now over 1,400 employees.