5 things to look out for in Monzo's 2020 annual report

New faces, net income, losses, overheads and the C-word. Here's what to look out for... Given we’re in June, Monzo’s 2020 annual report should be published any day now.

Last year’s report, which covered 2018-19, gave an insight on the bank’s rapid customer growth, some of the internal metrics which Monzo is using to measure its users, and a look at upcoming features like credit scoring and mortgage broking.

But what are the key takeaways to look out for?

When it comes to overheads, Monzo’s people costs and per-customer contribution margin are key. 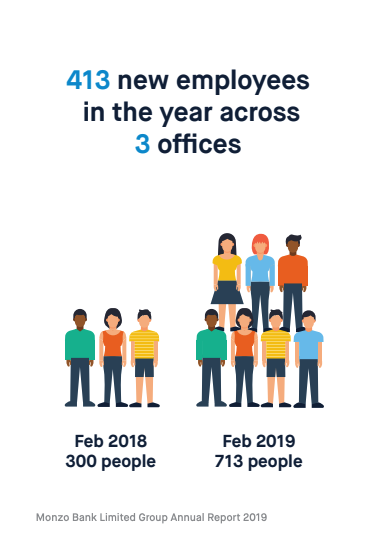 Last year was an explosive period of growth for Monzo, in customer base, but also in headcount, which at the end of the financial year had reached around 1,500 (up from 700 in Monzo’s 2019 report).

Such an increase would put the bank’s staff costs at more than £70m.

One of the other core metrics to watch when it comes to overheads is Monzo’s annual per-customer contribution margin (revenue, minus variable costs inc credit losses), which is shorthand for how much Monzo makes or loses per customer.

In 2019 this swung positive for the first time to +£4 (in 2018 it was -£15), meaning that on average Monzo was making more money per bank account than the cost of running those bank accounts.

The question for 2020 will be whether Monzo was able to grow this margin, and whether the margin was maintained as it scaled over the 12 months from 1.6m customers to over 3.6m.

Clearly the balancing act between Monzo’s revenue and losses (more on those below) is how revenue generative the bank is per customer, and net income is the figure to look out for here.

Last year when its results were published in June Monzo said it had just crossed £40m of annual run-rate revenue, however this forward-looking statement included the four months after its accounts were filed in February, when net income for the year stood at £9.15m.

According to its books, the bulk of Monzo’s income in 2018-19 came from ATM fees and the interchange fees it makes from retail transactions (£6.6m).

Monzo’s sharp user growth should have pushed the fees it earns from interchange fees and ATM withdrawals significantly higher for 2019-20.

Monzo’s lending operation was put into gear in 2019, with the launch of unsecured personal loans in August adding to the bank’s already growing overdrafts. 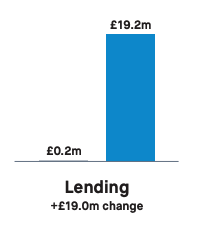 Twelve months later it’ll be interesting to see how the bank’s loan book, income and credit losses have all grown, and how these have contributed to its net income for 2019-20.

Finally Monzo makes money from referring customers to third-party services, and earning commissions from these referrals.

During 2019-20 Monzo struck up a host of partnerships with Shawbrook, OakNorth Bank, Paragon and Charter Savings Bank to give its customers access to savings accounts (pots), and also Ovo and Octopus Energy for utility bill switching.

All these partnerships should have led to Monzo seeing a boost in commissions last year.

There were several other commission-based projects mulled by Tom Blomfield in Monzo’s 2019 annual report which don’t appear to have come to fruition, including mortgage switching, insurance and helping people to track their borrowing. 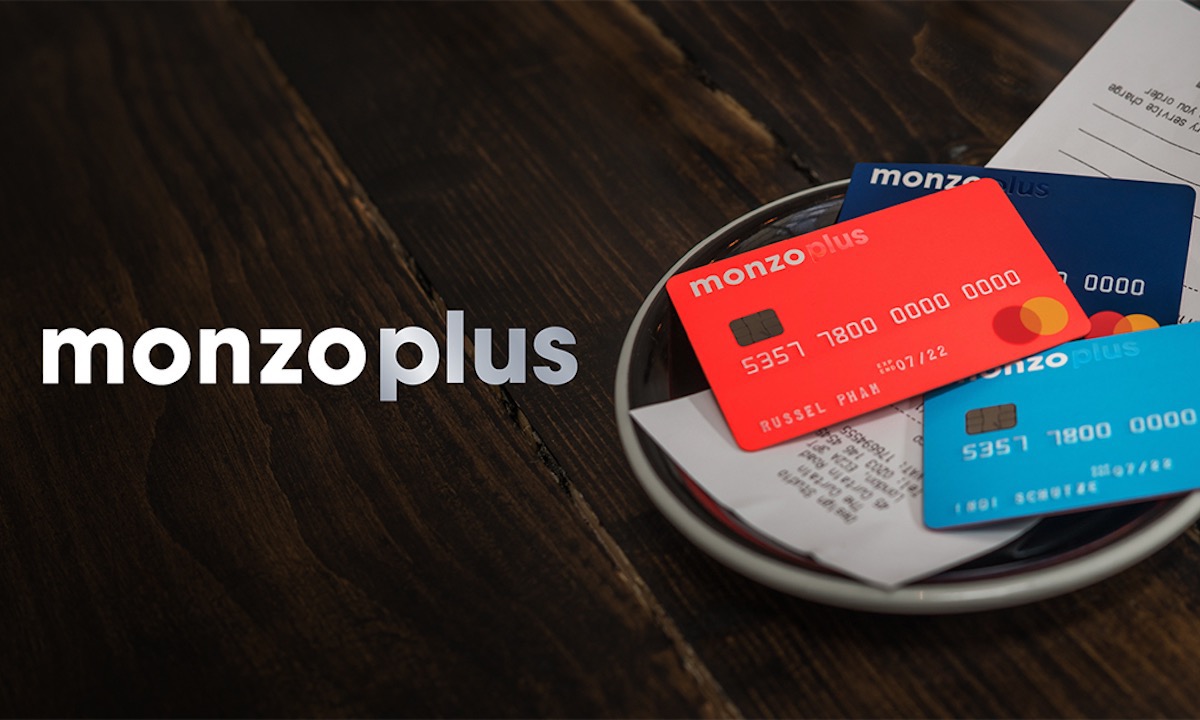 The final missing piece of Monzo’s ‘other income’ puzzle for 2019-20 is the bank’s Plus subscription service, the on-again/off-again project which has so far failed to launch let alone convert users into paying customers.

We’ll have to wait and see how big a net income gap is left by its absence.

All the income sources above are crucial towards stemming Monzo’s widening losses, which stood at £47.2m in its 2019 annual report.

Monzo’s losses will likely have grown further in the following 12 months, indeed last year then-CEO Tom Blomfield said the bank still had “plenty of work to do to get to profitability”, and all indications point to that still being the case in 2020.

Recent reports that Monzo is closing a £70m to £80m funding round in the coming weeks at a 40 per cent discount would seem to indicate that the bank is looking to shore-up its balance sheet for the next financial year, event after raising a £113m Series F from Y Combinator in June 2019.

While the bank is diligently working on business as usual, it’s fair to say there’s been a huge amount of executive turnover in the last 12 months. 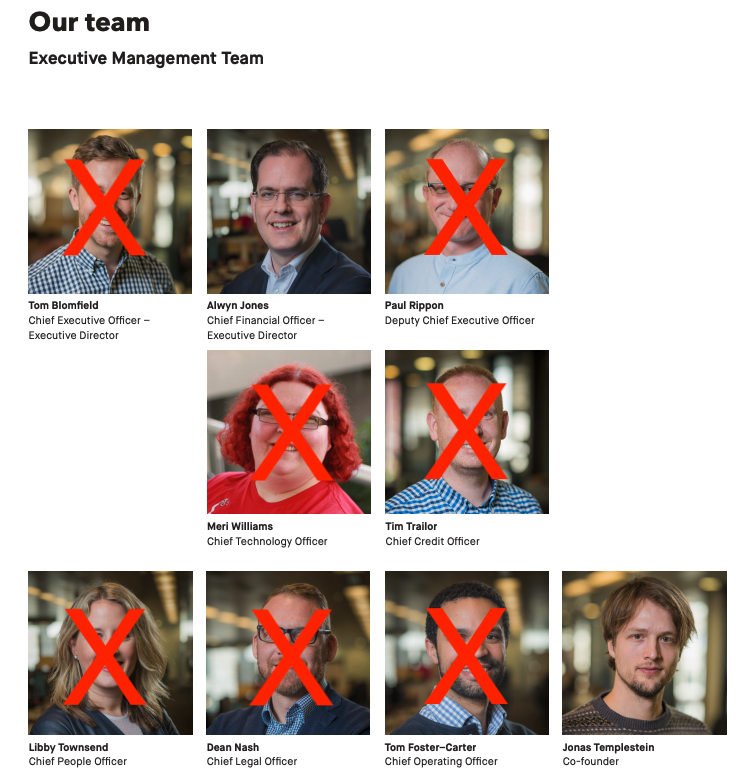 Nowhere is this more clear than in Monzo’s executive management team where, by AltFi’s count, just two employees remain in the same position they were in last year.

Paul Rippon, Meri Williams, Tim Trailor, Libby Townsend, Dean Nash and Tom Foster-Carter have all left Monzo, while Tom Blomfield recently moved into the newly-created role of President and Jonas Templestein took over some of the CTO responsibilities from Williams.

What’ll be interesting to see in 2020 is which new faces pop onto this page.

Obviously incoming UK CEO TS Anil will take top billing along with Blomfield in the newly created role of President, but other roles remain either unfilled or unclear where responsibilities have been shifted.

Given Monzo’s annual report was filed in February 2020, it's important to remember that coronavirus had no impact on any of the figures contained within the report.

However, given that much of the report will have been written since February, Tom Blomfield or TS Anil will likely look to address the bank’s future in a post-coronavirus world.

Here Monzo—like Revolut, Starling and many other high street banks—will be hit by a sharp decline in interchange income and ATM fees during the first half of 2020.

The subsequent tightening of consumer spending and recession will likely make 2020 a tough year to launch Monzo’s Plus subscription service in.

One positive may be the recent wave of people rethinking and restructuring their finances—as we’ve seen with the likes of PensionBee and in switching rates to digital banks—here Monzo’s commission-based referrals may see a boost.

And that’s it, everything we’ll be looking out for in Monzo’s 2020 annual report.

What are you looking out for? Did we miss something? Let us know @AltFiNews