By Oliver Smith on Wednesday 29 December 2021

The Starling CEO has responded on Twitter, welcoming the debate. The letter sent to MPs accuses Starling of being among the banks trying to “stifle this innovation” and claims that Boden’s comments were “uncompetitive and typical of banks trying to thwart the future of innovation in financial services”.

Among its signatories are Thought Machine’s Paul Taylor, Augmentum Fintech’s Tim Levene and MarketFinance’s Anil Stocker, the letter was organised via the Fintech Founders network. 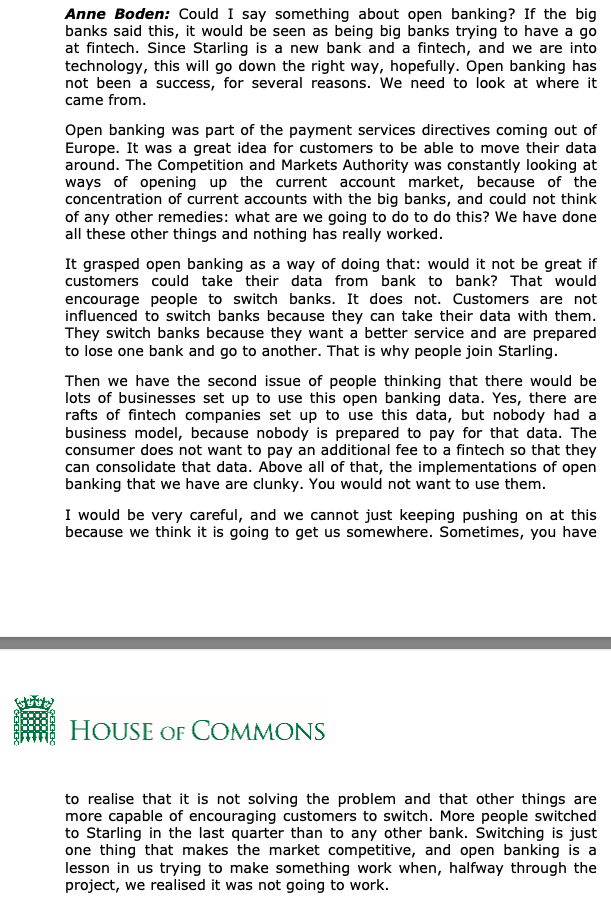 For context, Boden had told MPs in October that “Open banking has not been a success, for several reasons.”

She pointed to open banking not resulting in an increase in account switching, and the lack of business models to pay for and harness open banking data in a way that consumers want to use.

“I would be very careful, and we cannot just keeping pushing on at this because we think it is going to get us somewhere. Sometimes, you have to realise that it is not solving the problem and that other things are more capable of encouraging customers to switch,” she concluded.

Today’s letter described her comments as a “dramatic oversimplification” of the situation, with open banking having the “potential to unlock even more innovation”.

Boden on Twitter welcomed the debate and said she was “happy to brainstorm with these Open Banking entrepreneurs to see if I can help.”

The CEO also pointed out that of the signatories, 47 are men and just 3 are women, adding “FinTech must do better on diversity.”

Freddy Kelly, Founder and CEO of Credit Kudos and one of the signatories, told AltFi: "It's absurd to suggest open banking has been a failure in the UK. Thousands of companies and millions of customers are now relying on open banking - and we're just scratching the surface in terms of its potential.”

“If the UK wants to retain its status as a world leader in fintech, open banking has to be here to stay."

Speaking to The Times, who first reported on the letter, Boden described herself as "one of the biggest advocates of opening up banking."

"I believe it’s all about taking on the big banks and changing it and making things more competitive for consumers. But I speak the truth, and I’m pretty honest about when things are working and when they’re not working. I want to open the debate because if things are not working, we need to fix them, and we need to fix them in the interests of consumers, not the fintech industry.”

Here’s the letter in full:

The Fintech Founders group – and in particular those members whose names appear below – are writing to challenge the recent claim that open banking in the UK has been a failure – a claim made by Anne Boden recently when she was addressing your Committee.

This is not our view, and we believe that this view is uncompetitive and typical of banks trying to thwart the future of innovation in financial services. Although the technology has only been live since November 2018, open banking has already led to the formation of a whole host of new start-ups, raising hundreds of millions of dollars in new venture capital investment. There are now over 2.5 million open banking payments a month, compared to just 320,000 in the whole of 2018. Whilst the implementation has been far from perfect, and there are challenges – but we are still in the early stages of the journey.

Figures from Credit Kudos show that open banking enables an evaluation of a person’s financial situation and behaviour, four-times faster than how it is done without using open banking; and leads to a 15% increase in acceptance rates and 5.7% reduction in default rates.

The representation to your Committee was that ‘people want better service; they don’t want their data.’ However this is a dramatic oversimplification of the proposition provided by open banking. Open banking is bringing about significant benefits to consumers across the country: it offers people greater security and transparency, as well as a faster, more streamlined way of accessing financing.

Open banking has the potential to unlock even more innovation. It now needs to evolve realising the full potential of Open Finance as described in the Kalifa Review of UK Fintech, and banks trying to stifle this innovation need to be called out, and the market needs to continue to be educated about its benefits. The UK was a world leader in developing open banking and it is vital we maintain this advantage as part of our wider ambition that the UK retains its status as a global leader in Fintech more widely.

Fintech Founders shares the Treasury’s vision of a payments sector ‘at the forefront of technology and innovation in which the full potential of open banking enabled payments is unlocked safely and securely’, and we look forward to working with the Government to achieve this goal.