The FX fintech has now secured FCA and NBB licences. Challenger money transfer app Atlantic Money has secured its licence to operate in Europe from the National Bank of Belgium, the first company to do so in more than a year.

Just a week after starting its product rollout in the UK, the London-based fintech will now be able to operate in Europe, with access to all 30 EU and EEA member states.

Founded by Robinhood alumni Patrick Kavanagh and Neeraj Baid, the startup offers cross-border transfers at a flat fixed-fee of £3 on balances up to £1m, differentiating itself from competitors like Wise and Revolut.

The two launched the business after moving to the UK from the US and seeing how much more retail customers were charged for international transfers compared to large financial institutions.

“When you look at the fundamentals at a global level you see that there are big centralised exchanges where institutions trade against each other. And there are places where retail customers trade, and the pricing of these places is very different,” Baid told AltFi.

“If I go to HSBC, they're happy to charge me three per cent, which is ridiculous.

“And I know that when they go to trade with their bank friends, they're not paying three per cent, they're paying basically zero.”

As ex-pats in the UK and having worked at trading platform Robinhood for more than five years, the two knew there had to be a better solution.

“We've seen both sides of this coin and we know that that world exists, and we were frustrated to be paying the rates that we know banks are marking up,” he added.

“We knew it could be better and we were excited to make it better.”

With Atlantic Money, Baid and Kavanagh have positioned themselves almost as the antithesis of the so-called ‘super app’, once a label reserved for the likes of Revolut, and now an increasingly common descriptor.

Focusing on one thing and doing it really well – at least for the time being – seems to be the aim for Atlantic Money.

“What you notice is that over the course of 10 years or so, companies go from being the best in the marketplace at one thing to now trying to be everything for everyone,” Baid said.

Once Baid and Kavanagh have money transfer sorted, maybe we’ll see them expanding elsewhere, but not at the expense of this initial product, not under the same app and perhaps not even the same name.

“[Atlantic Money is] a product that is dramatically better on price and also on experience, because we're building a focused product,” Baid said.

“We're building a product that's really, really great at money transfer, and isn't trying to do a bunch of other things.

“We recognise that for the people that benefit most from money transfer, they want an app that’s simple and just works for them.”

The company’s key point of differentiation from its competitors is its fixed fee of £3 for any transfer of up to £1m.

If you want a slightly faster rate of transfer, you’ll be charged a fixed 0.05 per cent of the transfer amount to upgrade to “express” or “instant”.

“The reason we're able to keep [the cost] so low is because we’ve found, I think, the most efficient way to convert money,” Baid said.

“And we're proud to be doing [that] and that's why that number is so low.” 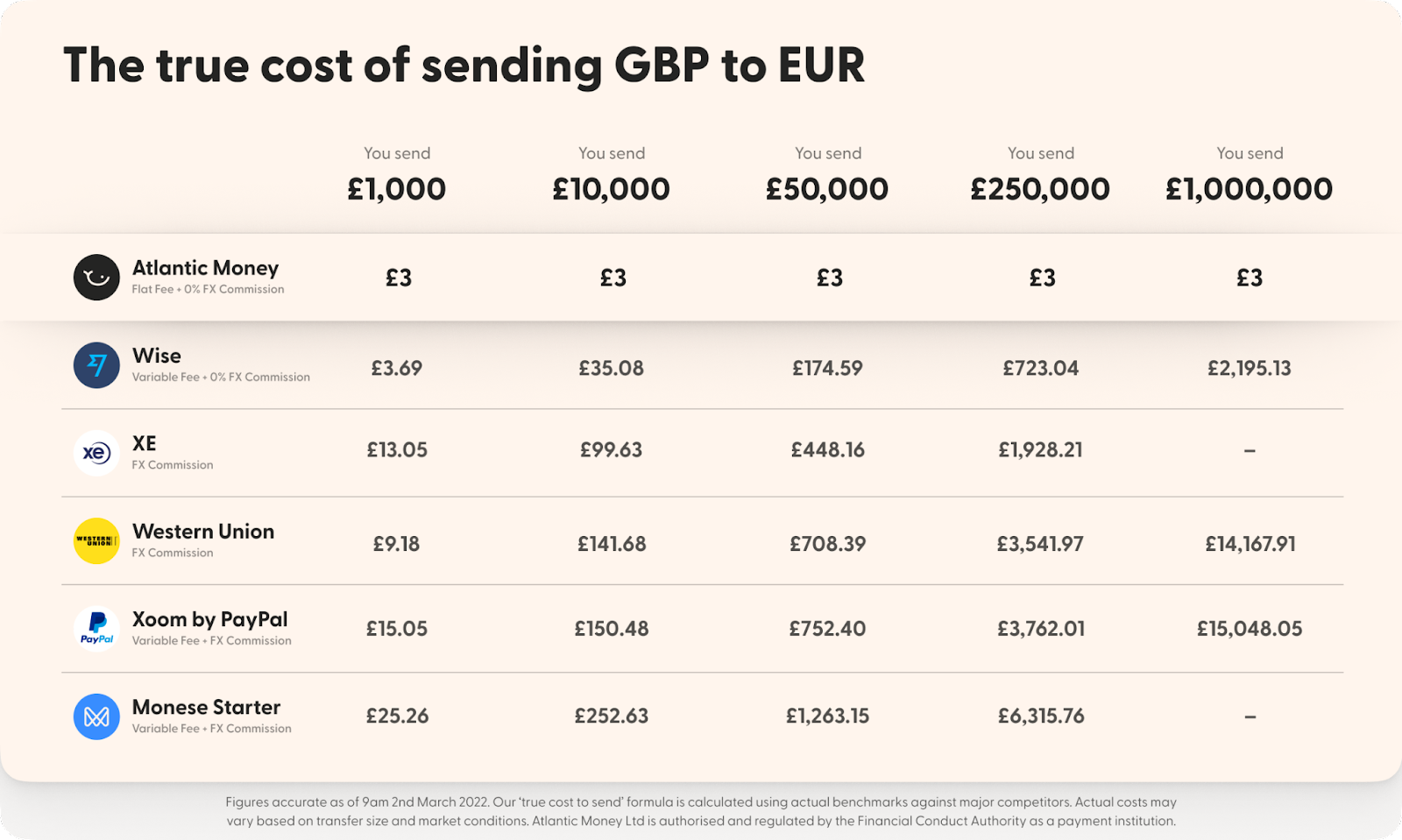 Atlantic Money plans to launch gradually across the EU, kicking off with Belgium, followed by Germany and Austria.

EU residents will be able to send money to major currency corridors through the company’s app.

The company reckons it will save its average customer around 75 per cent annually when compared to its closest competitor, Wise, and sees its primary customers as those with recurring expenses abroad such as credit card debt, tuition fees, investments or mortgages.

“I think it's really important to recognise that the product is focused on a specific kind of person, and it's not for everyone,” Baid said.

The company currently supports 10 currencies, including GBP, USD, EUR, CAN and AUD which Baid says is “not by accident”.

It’s with these currencies that it's able to “really drive the cost down as low as possible”, and it is this singular focus that the company thinks sets it apart.

“I think we're more focused than everybody else. And that results in a better product for our customer,” Baid said.

“And I think that's the core of what we're really proud of.”