The anonymous No Face sat down with AltFi to talk all things degradation, death and decay, and being a million miles away from the "bro-y" NFT world. A Discord community with just one rule: Don’t be a dick.

And an anonymous founder and creator aptly called No Face.

Confused? Strap in, because we’ve only just scratched the surface of the world of Goth Girlfriends: the alternative NFT for the goth community. 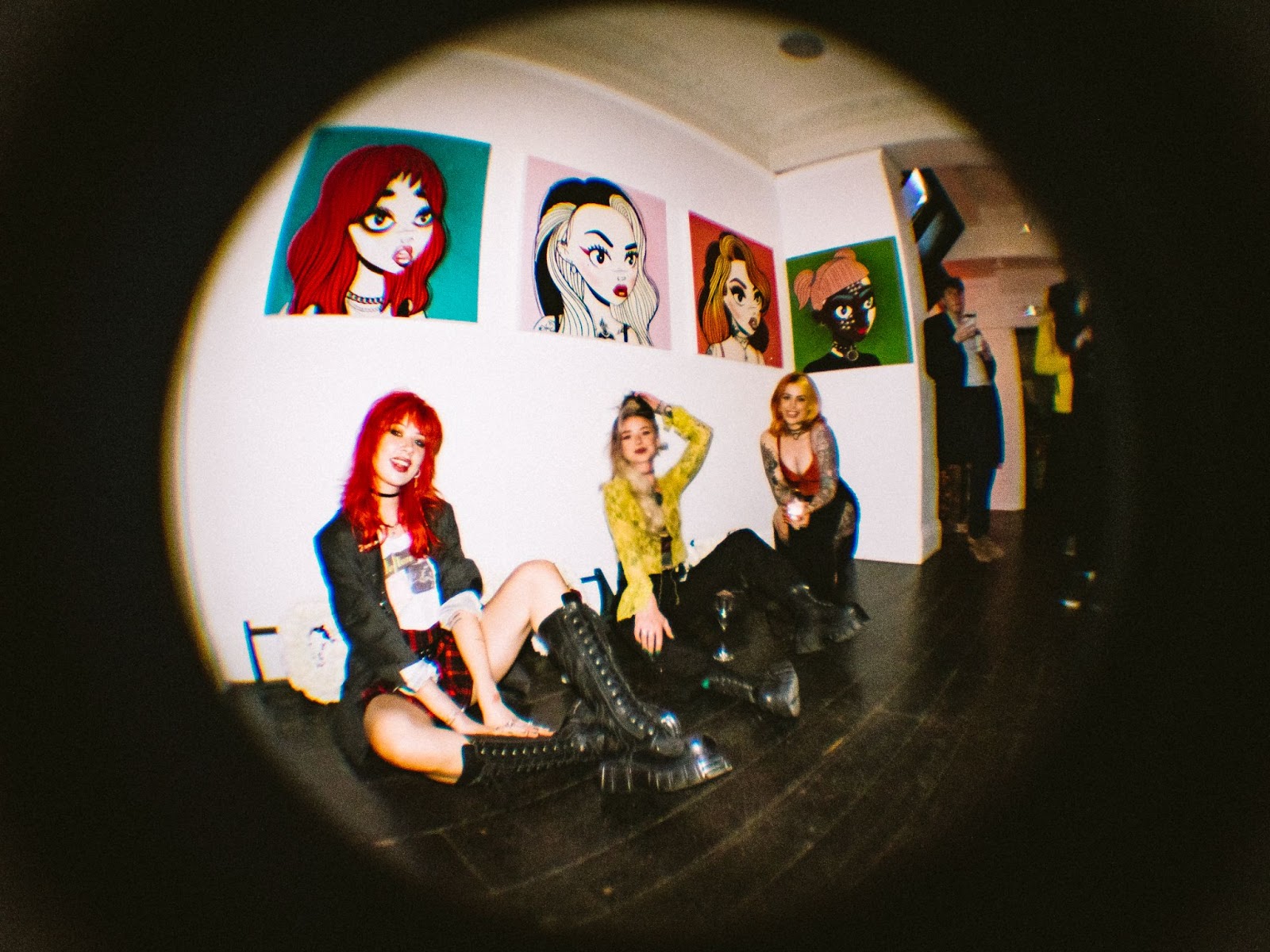 After about nine months of working in the more “traditional” NFT (non-fungible token) space, No Face, the company’s founder and grand high witch, decided to launch their own project, in the form of Goth Girlfriends.

“I didn't see anything that represented me and all the things that I liked within NFT's,” No Face told AltFi.

“There were amazing artists doing amazing things, and amazing developers creating these platforms and these projects, which were really cool.

“But I didn't see anything that really embraced the kind of subculture that I've been in since I was a teenager, with alternative music and alternative fashion and a gloomy outlook on life, let's say.”

The “goth” in the company’s name “Goth Girlfriends” is used as a catch-all term, No Face said.

Quoting Creeper’s Ian Miles, they explained it’s about “degradation, death and decay” in a broader sense, encompassing, punk, metal heads, emo and “the spookier side of life”.

Somehow this theme of broadened acceptance within what seems like a very niche group really makes a lot of sense, and it’s a thread that runs through the ethos of Goth Girlfriends.

Sitting  “a million miles away from the bro-y optimism or rise and grind style of crypto” is this alternative community with a passion for all things spooky and gothic.

Neither goth nor girlfriend is the first word that springs to mind when you think of the NFT space, and that’s exactly the point.

“We’re creating a space in the NFT world for people who might not traditionally feel seen or welcomed,” No Face said.

“We're really just embracing the nihilism. And the feminine side of it as well,” they added. Taking a step back, NFTs are tokens that are owned digitally and can be be verified on the blockchain.

What this means is that rather than being a file stored on your device, it is stored in your wallet in a decentralised way on the blockchain and can be tracked.

So every transaction that has ever been made can be tracked, and that’s how you can verify your NFT has come directly from the wallet of the creator and is authentic and unique.

For Goth Girlfriends, while the project might be based around NFTs and that might be the ticket to entry, that is really what it is: an entry ticket.

Yes, it comes in the form of a one-of-a-kind piece of digital art, but while the golden ticket might be shiny, it’s Willy Wonka’s chocolate factory that is far more exciting.

“I think what we're trying to do is build a community and a brand, and then the technology that we use is almost a platform for that, rather than the unique selling point,” No Face said.

“I think the way you will see all successful NFT projects go is by creating a brand off the back of that, whether it be within finance, within entertainment, within technology, or within music and the surrounding environment, which is what we're trying to do.”

No Face really stressed that Goth Girlfriends is a traditional community, rather than simply an NFT project. 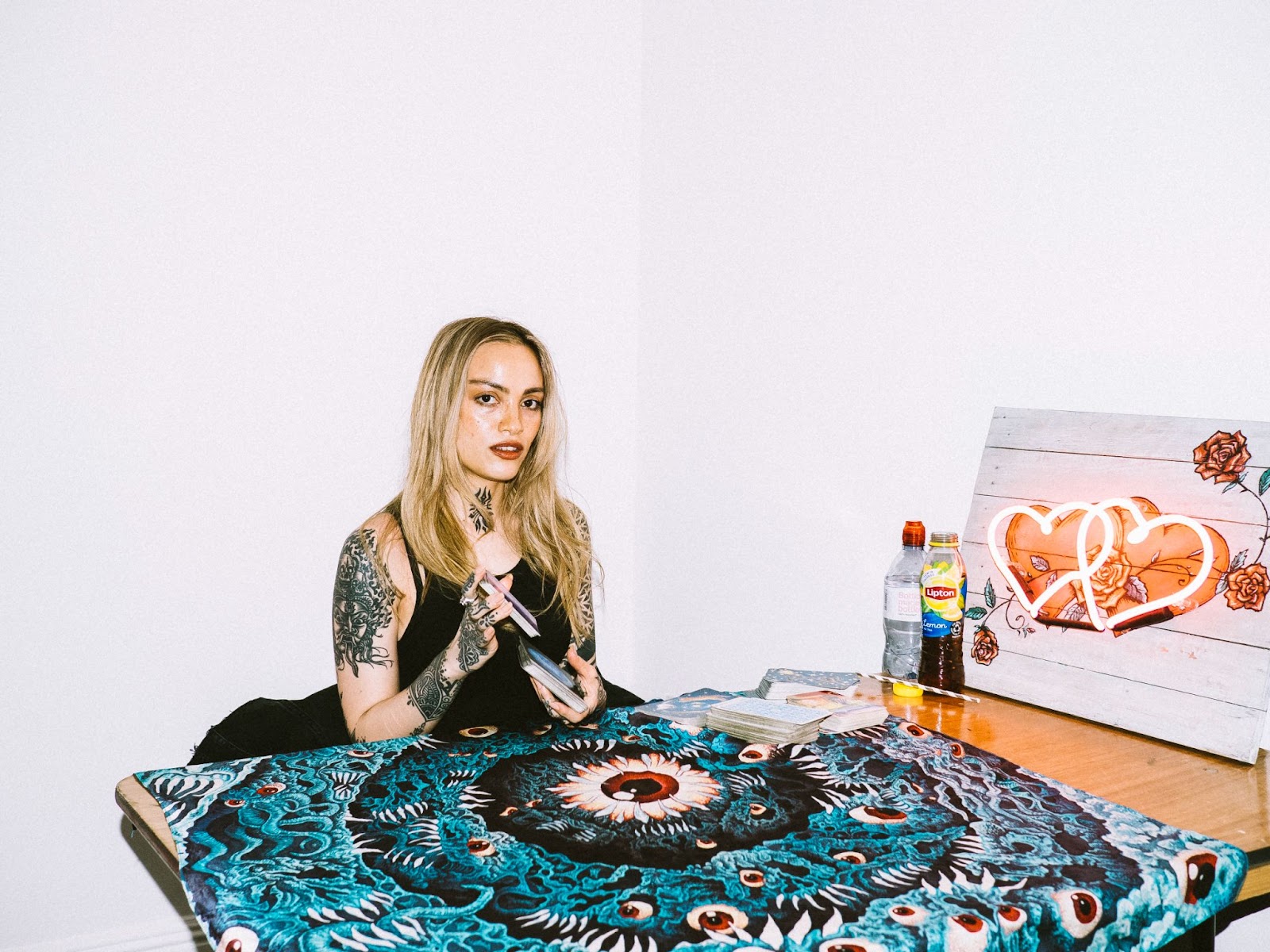 What’s inside the factory?

So in addition to getting a one-off piece of digital art by HE Creative, purchasing a Goth Girlfriends NFT gives you access to a range of perks.

The company is planning to have its own events in the future, and these might be free for Goth Girlfriends, for example, or merch might be discounted.

So far there have been airdrops, free posters and the pop-up gallery event in Soho with the tattoo artist and tarot reader.

Yes, people really went to a gallery opening and left with art on their arms.

“My incentive is much grander than just selling NFT projects out,” No Face said.

“I've done that before. And yeah, it was alright. But this project has a real purpose and a niche that is very close to me, and important to me.”

The aim is to create a space for people who are disaffected and marginalised, No Face explained.

Part of that includes the small task of “gothic world domination”.

“It’s about bringing back this idea of the alternative subculture as something important,” they said.

“It's a positive space, and gothic world domination isn't about dominating people it's about creating a space for us to be who we are, on our own without fear of persecution.

“That might sound quite grand for an NFT project but also it's what I believe truly.” Another big draw of the NFT world is the anonymity of it all.

Unsurprising for a creator whose name is literally No Face and whose photos online have blurred out faces.

Fittingly, No Face chose to name themselves after their favourite anime character from Spirited Away – a genderless ghost “who just wants a friend and causes a lot of chaos in the process”.

Something the founder said they could relate to a lot.

“I think that technology is really open to anyone,” No Face said.

“I think that's what attracts me to a lot of crypto and NFTs, which are two sides of the same coin.

“The whole thing about being anonymous means that you aren't judged about who you are.”

This comes back again to Goth Girlfriends putting itself at a distance from the traditional NFT space in terms of its demographic. For a lot of people, their Goth Girlfriends NFT is their first, No Face said.

There are 9973 random pieces generated by a script of around 600 attributes and 27 unique ones designed with No Face’s input.

There are different rarities, and you can count yourself lucky if you find one with blue or green or red skin or golden accessories, but each one is still unique and different.

“I think we're building within NFT's and within this space because we know that we're at the start of an economic and cultural revolution that will be catalysed by this technology,” No Face said.

“And what we really want to do is create a space within these very male-dominated spaces for the rest of us to learn and grow together and to show people that [even though] the technology is new and the markets within it are volatile, really the price of Goth Girlfriends hasn't changed in Solana terms.” 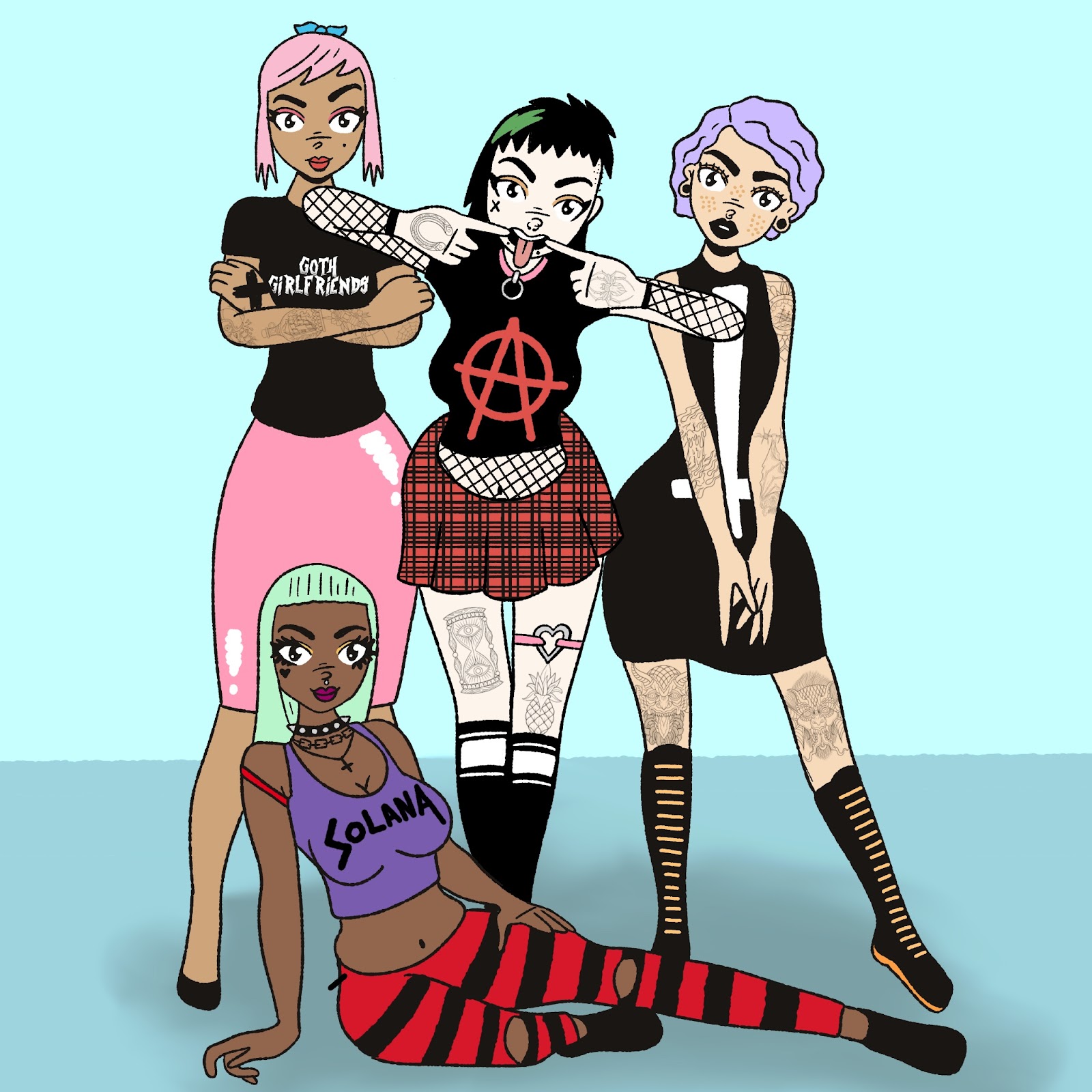 All of the Goth Girlfriends NFTs are priced in Solana, and cost 0.666, naturally.

They chose Solana for a number of reasons, one being that it immediately provides an answer for one of NFTs' biggest counterarguments: the environmental impact of cryptocurrency.

As with any currency, fiat or crypto, there is volatility in the strength of the price of it, and that’s the biggest challenge for Goth Girlfriends.

There are ways of managing that treasury though, No Face explained.

Some of the Solana is sold into the stablecoin USDC, but the company also gets a percentage of every secondary sale made.

So if someone decides to leave, or maybe bought multiple and wants to sell some off, Goth Girlfriends gets five per cent of every transaction.

No Face strongly encourages people to purchase an NFT as a product, not an investment, the value of which could go up or down.

“I would say if you're buying into flip it, then that's your decision,” they said.

“There's nothing I can do about that as an NFT project founder.”

The plus side to price dropping, is that for some people there will be a lower barrier to entry and they will be able to purchase an NFT more easily, they said.

“That's just the nature of crypto and being valued in a currency that is volatile,” No Face said.

“It means that the people who bought before could have got it cheaper.

“But that's also true in the inverse. Iit could have gone up a lot higher, and it would have been more expensive.”

The lowered barrier for entry extends to resales as well, where it might cost even less to purchase an NFT.

There is almost as much volume on secondary sales as there is on primary sales, something pretty common for NFTs, perhaps in part because you have a choice over what your NFT will look like, as opposed to the candy machine style of buying directly. 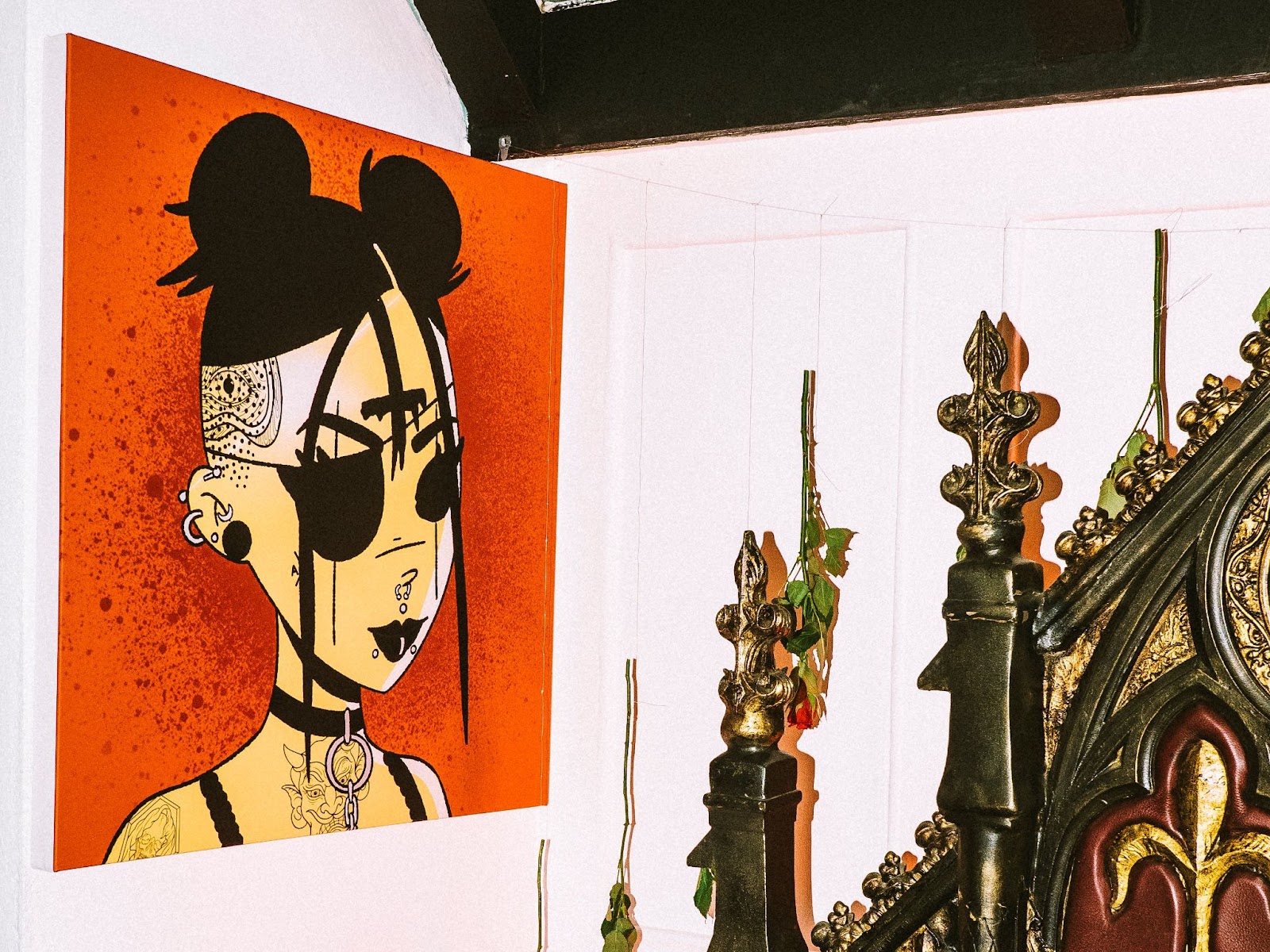 The future of NFTs?

The second big argument against NFTs, after the environmental impact issue, is that it doesn’t support artists and creatives, or that it might lead to plagiarism.

For Goth Girlfriends, the solution is that all artwork is created by HE Creative and is traceable back to the project treasury.

There is also a general scepticism around what many people feel is just the same as a picture or a screenshot.

“I think there's a lot of negativity around NFTs,” No Face said.

“I think what people don't realise is they're just a medium of expression, like a canvas or a sculpture is.

So is this the future of the art world?

“I do think it is the future of all digital artistic expression,” No Face said.

“And not just artistry, but all cultural artefacts will exist digitally.”

Source: NFTs by HE Creative, photos by Jessie Rose.