The Tokenomics behind Sweatcoin

By Stephan Roth on Wednesday 14 September 2022

Sweatcoin is trying to discover the market value of being fit and healthy. The crypto space has seen its fair share of avant-garde economic models backing cryptocurrencies, but perhaps none more so than Sweatcoin, which is betting big on the monetary value of your fitness.

Established in 2015, Oleg Fomenko, Anton Deryatka and Egor Khmelev have looked to build a 'Sweat Economy', where customers are incentivised to be more active by receiving rewards for their efforts in the form of sweatcoins.

"Nature did not build you to be active. The only way to overcome an inherent biological bias is instant gratification," Oleg Fomenko, the co-founder and CPO of Sweatcoin explains to AltFi.

However, sweatcoins are native to the Sweatcoin app. This means they can only be exchanged for products and services offered on the app.

On 13 September, Sweatcoincoin launched its SWEAT cryptocurrency. Fomenko explains that by launching crypto in addition to the sweatcoin used on the Sweatcoin app, "the utility of fitness will expand".

By creating a SWEAT crypto, users can access blockchain products and services, which would increase the "utility" of SWEAT. Users are now able to trade their SWEAT cryptos on most major exchanges and are compatible with the Near (nep-141) and Ethereum (ERC-20) protocols.

With an estimated 137 million Sweatcoin users registering 26 billion steps, the question begs how will Sweatcoin be able to maintain its instant reward, move-to-earn model once SWEAT hits the open market?

In this article, AltFi will delve into the tokenonmics of Sweatcoin's new SWEAT crypto and explain how this groundbreaking app is trying to break even by monetising your physical activity.

A new app and a futuristic idea, Sweatcoin's economic model is not dissimilar to an economic theory proposed over 150 years ago – specifically Karl Marx's 'labour theory of value'.

"Sweatcoin is created by the value of your physical activity and the more active you are the more sweatcoins you can earn," Fomenko explains.

Sweatcoin rewards users for being more active, or taking more steps. For instance, a user needs to walk 15 minutes per day to hit 1,000 steps which will then be rewarded with one sweatcoin. The more steps, the more pay.

However, as Sweatcoin introduces the SWEAT crypto to the world, a new set of tokenomics will welcome users.

As Marx points out, an inherent issue with an economic model predicated on labour is that the value of labour must decline in order for an employer to remain profitable. Just as the theory suggests, Sweatcoin team will be faced with two decisions: make rewards more difficult or reduce the amount of SWEAT paid out to users.

"The value of physical activity and increasing marginal cost of production means that you will actually be asked for more and more physical activity," Fomenko said, referring to the Sweat Economy Litepaper.

This means that although the number of steps that will generate SWEAT will remain at 1,000 steps per SWEAT until 2024, the reward for the steps will decrease over time.

The breakdown is as follows: 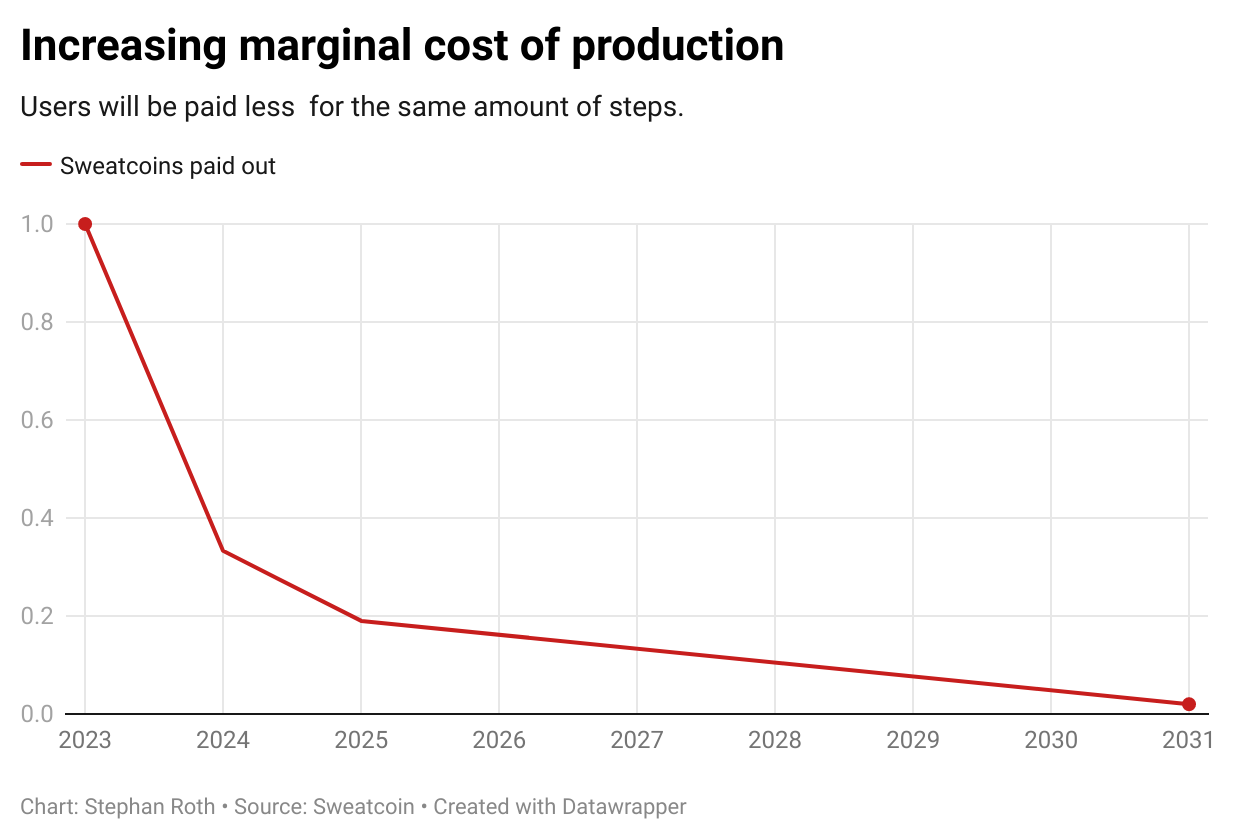 Since steps are the resource that fuels Sweatcoin's economy, Sweatcoin will need to offer an attractive reward for users to join the company. Initially, the demand curve (red), which represents Sweatcoin's demand for users, starts at a point where the value of steps is high.

Sweatcoin's demand for users will only grow as the business expands. However, as more users join the platform, the amount that Sweatcoin can pay for users' steps falls and their value declines.

On the supply-side (blue), users supply their steps for rewards. Yet, if their steps are devalued and the marginal cost of rewards rises, users will supply fewer steps over time. They become less active or no longer motivated and so could leave the Sweatcoin platform, so supply stagnates and potentially falls.

Ideally, there is an optimal point (red dot) where the number of users will not decrease the value of steps and so users will be willing to supply their steps. This point is called an 'equilibrium' and reflects the optimal market value of the Sweatcoin user's steps. 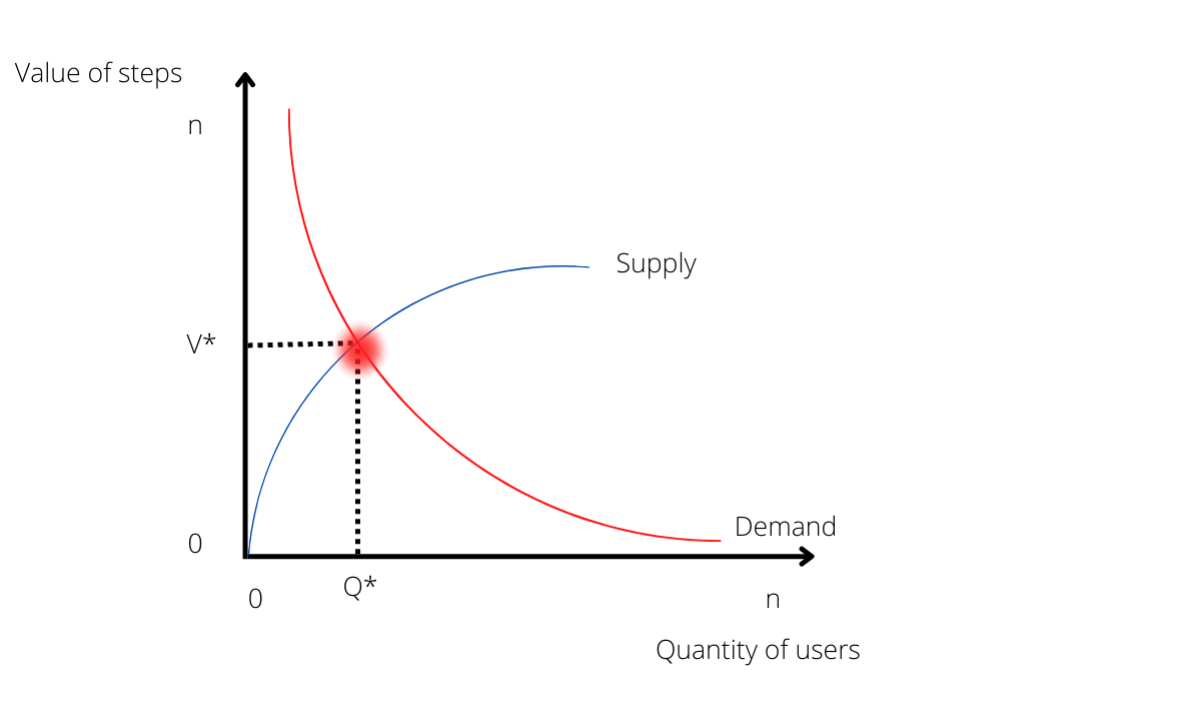 Finding the optimal value for steps is exactly what Sweatcoin are doing. By launching SWEAT, Sweatcoin has looked to the open market to discover the market values of their user's hard-earned steps.

Now, the value of sweatcoin before the launch of SWEAT can be estimated. According to the Sweat Economy Litepaper, the value of goods and services purchased on the Sweatcoin app's marketplace in March 2022 hit $24,559.310.

At the time, Sweatcoin had roughly 60m users who had completed 20bn steps. Since one sweatcoin represents 1,000 steps, the number of sweatcoins in circulation should equate to 20m as of April 2022.

By dividing the value of goods and services in March 2022 by the 20m sweatcoins in circulation, the price of one sweatcoin should equate to $0.0012279655

"There is no doubt that this token is worth something. It cannot be equal to zero because fitness is valuable. The market will decide how much the value is," Fomenko said.

Despite Fomenko's belief that SWEAT will not equate to zero, Sweatcoin has a plan to help stabilise the price of SWEAT. Sweatcoin will introduce two macro price mechanisms that will seek to raise or maintain the price of SWEAT: coin burning and staking.

Coin burning refers to an act where cryptos are sent to a wallet that can only receive but not spend the cryptos. Burning removes SWEAT available for purchase, which means SWEAT is removed from circulation.

At present, the estimated number of Sweatcoin users is believed to be 137m and the number of sweatcoins issued as of 13 September rests at 26m. Since Sweatcoin has promised to match native sweatcoins 1:1 with SWEAT, there should be roughly 26m SWEAT in circulation at the launch.

On 13 September, Sweatcoin will commit to burning 4.5m sweatcoins, reducing the number of SWEAT in circulation from 25m to 22m.

The second price mechanism is staking, Staking means that users agree to lock up or deposit their SWEAT in exchange for receiving interest. By staking, the amount of SWEAT on the market is reduced and so SWEAT in circulation declines. The more users wish to Stake the higher their rewards.

The Sweat Foundation will act as SWEAT's bank by purchasing or burning SWEAT and using their SWEAT reserves to pay staking interest owed to users.

"We're looking into making our token more scarce. If we take the token from circulation, it prevents inflationary behaviour and preserves value", Fomenko explains. 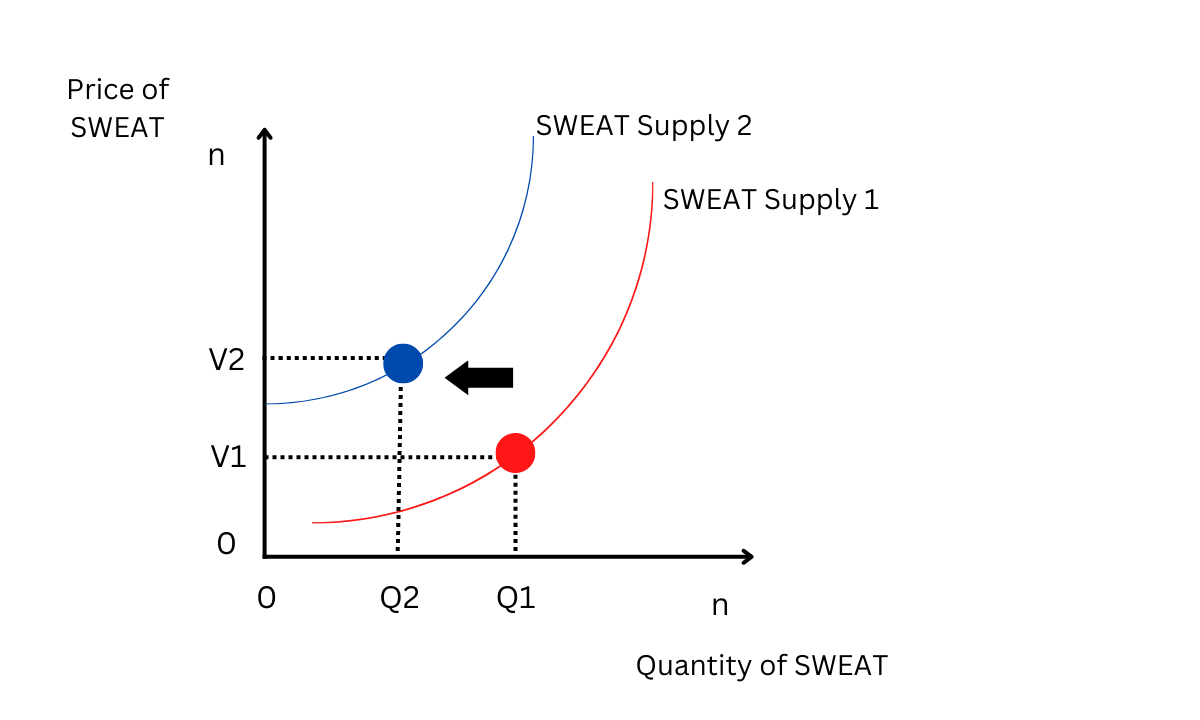 Chart 3 depicts the mechanics of coin burning and staking. Initially, the price of SWEAT and the SWEAT in circulation is at the red point. As more SWEAT are removed from circulation, SWEAT Supply 1 shift to the blue point, SWEAT Supply 2. As the number of SWEAT decreases, its price rises.

However, will scarcity be enough to ensure that the price of SWEAT does not collapse and so with its user's hard-earned rewards?

Coin burning and staking may help Sweatcoin stabilise the price of SWEAT, but Fomenko insists that the tokenomics is far from done.

"We are going to introduce nine revenue streams that will support our token and operations", Fomenko said.

The nine revenue streams to will be introduced over Sweatcoin's five-year plan that is most associated with tokenomics include the introduction of NFTs and 'movement validators'. Key to this plan is transitioning from a web 2 to web 3 blockchain-based system.

In web2 users do not own their date. However, in web3, the idea is that data stored on the blockchain is a resource owned by the owner of the data. As mentioned above, SWEAT will be compatible with the Near (nep-141) and Ethereum (ERC-20)  protocols, which are associated with NFTs and allow projects to run on a web3 conducive blockchain.

Despite Sweatcoin's Litepaper suggesting "Your data is yours. Now and forever", insurers, doctors, academic institutions and investors could purchase this data from users.

According to the Sweatcoin Economy Litepaper, Sweatcoin aims to launch NFTs in their 'Tokenomics phase one stage, where NFTs will slowly be offered to users between August - December 2022.

These NFTs will allow users to earn rewards and mint more SWEAT by staking. However, users must purchase and upgrade their NFTs with SWEAT, or else stake SWEAT to the Sweatcoin Foundation. If users do not continuously upgrade their NFT by paying a "considerable" amount of SWEAT, the NFT will "decay", according to the Litepaper.

Not only will users be angle to create and maintain NFTs,  'movement validators' – enterprises such as FitBit, Apple Watch and Pelaton – will be given the option to pay SWEAT to acquire and sell users NFT. Essentially, Sweatcoin must incentivise users to continuously stake SWEAT to maintain their NFTs but motivate them to monetise, then sell their data to third-parties.

"Just imagine if users could have all their fitness data in one place", Fomenko said. "It would mean that if you run, swim, or do other sports, you are making an NFT that is unique to your activity, he said."

What's more, Sweatcoin will look to introduce something akin to a proof-of-stake (PoS) consensus mechanism in 2025, when 'Tokenomics phase four' commences.

A PoS system means that individuals can stake their SWEAT and so become validators who ensure that the steps that generate SWEAT are not fraudulent. These validators oversee the minting of new SWEAT.  Up until today, users who staked SWEAT could be validators.

However from today, only movement validators will be given the power to verify SWEAT after staking a "considerable" amount of SWEAT to gain validator rights.

Ethereum, the second largest crypto by market cap is currently transitioning to a PoS system and one of the biggest critiques is that it promotes a top-heavy ecosystem, where more wealthy entities control the verification process and reap the rewards from staking.

By enthising external fitness app providers and other institutions to purchase user's NFT data and requesting that both movement validators and users stake more of their SWEAT, Sweatcoin can ensure that there is a continuous supply of SWEAT moving out of circulation – providing an additional layer to stabilise the price of SWEAT.

"I am very excited about our launch and the possibilities in the future. We've built a model that can last even if the start might be a bit tough", said Fomenko.